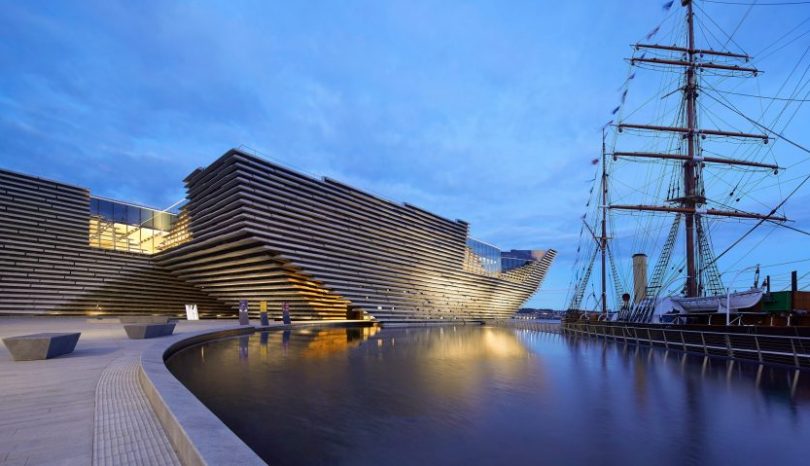 1045 – 1130  Gillian Molloy: When researching street names – Why is the hardest question

1510 – 1550  Peter McNiven: Reaching out: Place-names and community engagement in Dunkeld and Callander

V&A Dundee is a 2-minute walk from the railway station, along Riverside Drive.

(Non-members are welcome to attend, but cannot speak or vote at the AGM)

A major source for early place-names in Angus are the many charters of the Abbey of Arbroath. The abbey of Aberbrothoc was founded in 1178 by King William I (1165-1214) who donated the shire of Aberbrothoc to his new foundation as well as many other lands and churches.

The abbey rose to even greater prominence during the reign of Robert I (1306-29) who appointed Bernard as Abbot and then as his chancellor. It was during this time that the famous letter of Arbroath was sent to the Pope in Avignon on the 6th of April 1320.

Arbroath Abbey was both the largest and most wealthy in Scotland, and no fewer than eight “books” or collections of charters have survived. Patrick Chalmers and Cosmo Innes edited the earliest – 1178-1329 for the Bannatyne Club in 1848. The second volume covered 1329-1536, but sadly Chalmers died before it was published in 1856.

The first volume mainly consists of royal grants and confirmations in Latin, and records many Angus place-names for the first time. The second volume is also in Latin, but as time goes by in Scots, and mainly covers properties owned by the abbey being leased to local families. This includes descriptions of the merches/limites of various lands and tantalisingly records “little” place-names, sadly many of which are now lost.

The lecture illustrates some interesting examples from this rich source of Angus place-names.

Rev. Charles M. Robertson (1864-1927) was one of the greatest Scottish Gaelic scholars of the late nineteenth and early twentieth century. Today he is primarily known for his work on Scottish Gaelic dialects as published in the Transactions of the Gaelic Society of Inverness, The Celtic Review and An Deo-Ghréine. What is less well-known, however, is the vast amount of unpublished material which survives him. Robertson was not only interested in dialect – he also left a great deal of information on Gaelic phonology, ethnology, toponymy and oral culture. This work is all the more important because Robertson primarily gathered this information from regions of Scotland which today no longer have a living Gaelic tradition.

This talk will look at some of his Gaelic place-name material as part of the launch of Scottish Gaelic Place-names: The Collected Works of Charles M. Robertson edited by Dr Jacob King. This book is a culmination of a decade’s work, comprising a collection of all Robertson’s place-name material, primarily from unpublished sources.

Peter McNiven: Reaching out: Place-names and community engagement in Dunkeld and Callander

Gillian Molloy: When researching street names – Why is the hardest question

The talk relates to the problems faced when trying to decide why a particular street was so named. Local councils, police commissioners and landowners sometimes fail to explain their choice of street name. Records may only show a name on a feuing plan or in the minutes of a meeting. A particular street may have had several names over the centuries. Another street may appear to have never been officially named. Who, what or where does the name refer to? Searching for the answers can lead to fascinating side tracks.

This talk will draw heavily on work I did for my chapter ‘St Vigeans: Place, Place-names and Saints’ for the 2 volume Hunting Picts: Medieval Sculpture at St Vigeans, Angus, Jane Geddes et al. (Edinburgh, Historic Scotland 2017). It will focus on the medieval parishes of St Vigeans, Arbirlot, Inverkeilor, Ethie, Panbride and Kirkbuddo, half of which are hagiotoponyms (place-names containing saints’ names) and at least 2, possibly 4, of which have Pictish roots. Above all through the lens of place-names my talk will attempt to show that this whole fertile swathe of south-east Angus was from Pictish times organised into a territory supporting a high-status ecclesiastical centre at St Vigeans itself.